You are here: Home / Messianic Jews / ONLY Messianic School in Jerusalem 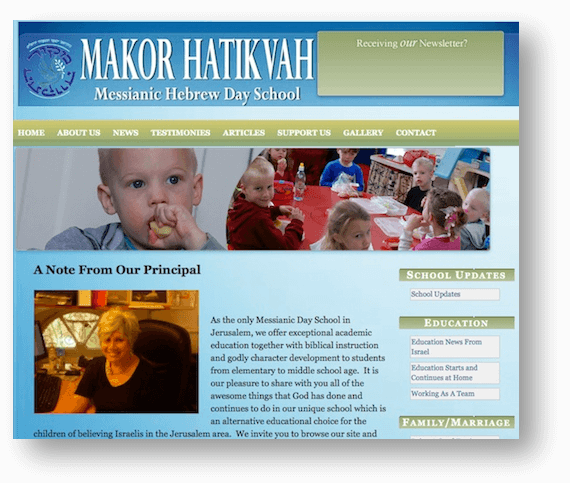 I know that you, along with many others who support and pray for us, have been waiting to hear if we have received an answer concerning our request for state recognition of our school. We have, and so I want to let you know what has happened. As some of you may know, about three years ago, Makor HaTikvah Messianic Day School began a process of seeking official state recognition for our school. Encouraged by the Ministry of Education to come under their supervision, we felt that this would not only give more weight and legitimacy to our school, which had, by that time, already been operating for 20 years, but we also saw this as a way to gain the much needed financial help that would result from such recognition and state funding.

All throughout this process, we carefully and systematically followed all the procedures which were required of us, including making certain structural changes to our building in order to conform to all of the required standards which were demanded of state recognized schools. We were happy to receive a final approval from the Board of Health and continued to move forward in order to reach the end of this process.

In that regard, we met with regional officials who interviewed us, filled out voluminous paperwork concerning our course of studies, teacher qualifications, etc., and interviewed many students, by speaking to them personally, and viewing their classes. They commented about how impressed they were with our school, our resources and our levels and standards and that we’d receive an answer within one to three months. That was around late October/early November of 2012.

After not hearing beyond that time, we began to inquire in the beginning of February, and it wasn’t until a few days ago that we received a final answer which denied our request for a license and was accompanied by a court order to close our school within 30 days …”